A really good puzzle game with some twists on match 3 gameplay I’ve never seen before. 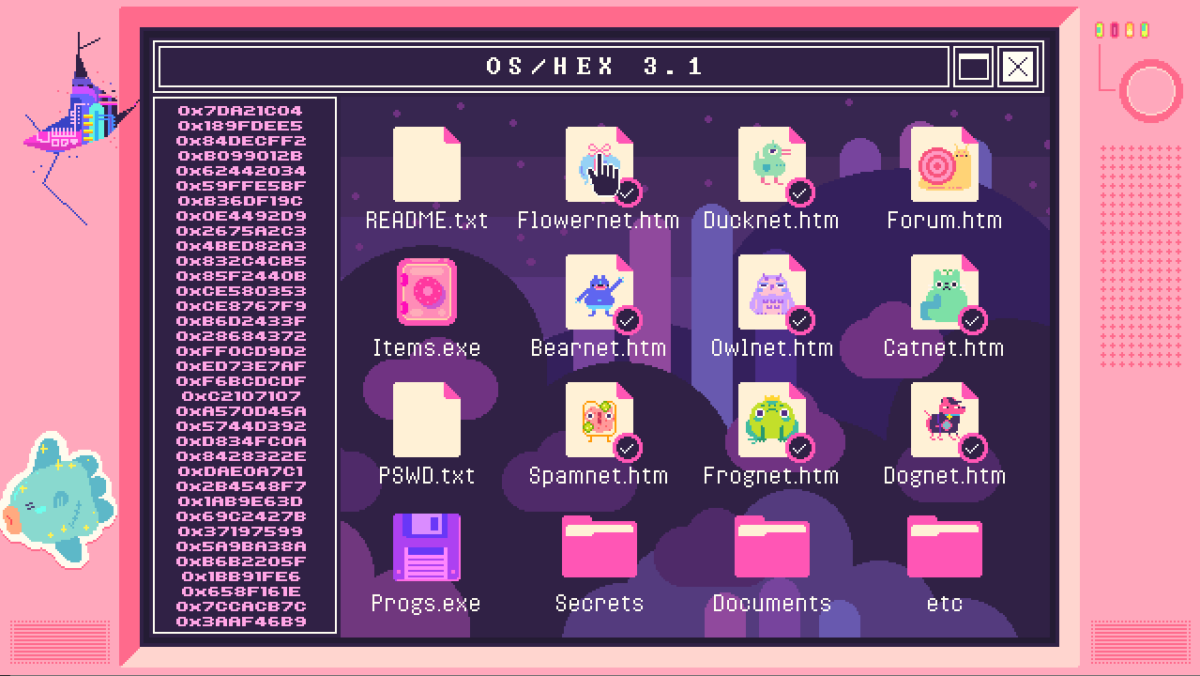 Ed Note: I did my best to take screenshots that don’t give anything about the game away, but some of the screenshots below might give small peeks at things that aren’t immediately obvious. If you want to avoid spoilers at all costs, just know that Beglitched is good, you can buy it here on Steam, or here on itch.io, and you should play it.

Beglitched might be the first real piece of gold I’ve personally found in the itch.io Racial Justice Bundle. The bundle has a ton of other great stuff in it as well, like Celeste, or Quadrilateral Cowboy. And there’s others as well. But it’s the first really good one that no one else had mentioned to me or told me about beforehand, which at least to me makes it the first real “Find” in the bundle of games. So let’s boot up our OS/HEX and talk about why that is.

So why do I like Beglitched so much? The game is a really unique sort of puzzler. While I’ve seen some of the game mechanics before, Beglitched uses those mechanics to do something pretty different by breaking a few of the key rules about how those mechanics usually play out. We’ll talk about that more in a second, but first let’s talk about how playing through a level in Beglitched works.

There are two main sections to most Beglitched levels, or as the game calls them, “networks.” Each section of a network consists of a bunch of linked machines, as seen above, and plays out like a combo of Minesweeper and RPG exploration. Each computer displays a set of symbols which tells you what is in the computers next to it. Your goal in most cases is to make it to the end of the network by finding the computer with the exit doors, and logging in. However, you can log into the other computers too. They can give you extra resources, like money or health, or also just blow you up a bit, a la Minesweeper. And sometimes, they’re hiding extra enemies. So what happens when you run into these enemies? Well, then it’s time for combat.

Combat in Beglitched is done via a match 3 style grid. Unlike many other match 3 games, however, every single type of shape on your grid has a different property. Some are fairly obvious, like the green cubes that give money, or batteries that give you energy. Where things get interesting is how you actually damage an opponent.

Most enemy hackers have fairly low HP, and only take one or two hits to defeat. The issue is that unlike many other match 3 games that use the size of your combos to do damage, in Beglitched you do damage by detonating bomb squares. The enemy hacker hides somewhere on your board, and you have to activate the compass squares and pink cycle squares to get information about where they’re hiding. So not only do you have to find your enemy, you then need to actually get a bomb sector over, and to detonate it. And each move you make takes cycles, and when that hits zero, the enemy gets to take an action. Most attack you and do something else, but some have their own specialties.

The one other big thing about Beglitched that I haven’t previously seen in a match 3 game is how it handles your board state at the end of a fight. When you defeat an enemy, your board doesn’t reset. Instead, the location of any tiles remain, and can be used in the next fight. It’s also worth noting that some of the better combo pieces, like blue compass sectors, are actually re-usable.

And the game plays into this. It actively encourages you to use weaker enemies to set up to beat tougher enemies by prepping compasses, bomb sectors, and farming money. It’s a fairly unique twist that can mean beating an enemy as fast as possible may not actually be the best move.

In addition, Beglitched is more than happy to subvert and play with these mechanics, and does so through almost every single one of its levels. Every time I thought I had the game solved, Beglitched pulled out another clever twist or trick for me to contend with.

I think this is one of the things it does best, and the reason I’m not talking more about it here is that these moments are best experienced fresh. I don’t want to spoil them.

Beyond the mechanics, Beglitched does almost everything incredibly well. It has a unique and interesting narrative that I actually ended up fairly curious about, and presentation and art is great. The only big gripe I have with the game is the audio, and it’s not even the audio itself. My problem lies in the lack of any sort of audio/options menu. The default audio is incredibly loud, and as such I ended up playing most of the game with it muted.

Beglitched is really good, and on occasion, really hard. It’s a puzzle game with excellent mechanics, and willingness to subvert them and tweak them into interesting challenges, without ever really going too far, or asking you to do the impossible. Other than my minor gripe about the lack of audio settings and sound, it has virtually no flaws. If you bought the itch.io racial justice bundle, you should play it. If you didn’t buy the bundle and like puzzle games or a challenge, you should pick it up anyway.

Wrath is good, but it’s not finished. You should wait to buy it for now.

Editorial Note: The images in this article I grabbed from the Steam Page. Usually I take my own screenshots, because independence and other stuff, but I had some difficultly with that, and honestly, the screenshots are accurate. But I don’t want to give the impression that I got all these photos myself.

I really like Wrath: Aeon of Ruin. It gives me a wonderful sense of nostalgia for an era of games that I never actually played, that of the old Doom/Quake/Duke Nukem Era. It might be because you will spend most of the game strafing around gothic corridors with a bunch of weapons. It might be because you will use those weapons against monsters that look like they were pulled from a fire sale at low-poly Lovecraft R Us.

And it might be because it was actually built on the old Quake engine. I had a ton of fun playing it, which makes me feel a bit bad about what I’m going to say: Even if this is a genre you love, I don’t think you should buy Wrath yet.

My recommendation doesn’t actually have anything to do with the gameplay itself (despite the fact that I definitely have a few gripes with some of the game’s systems), but instead with the fact that the game simply isn’t finished. There are only four levels, and while they’re good and polished, they only took me about 8 hours to play through on the medium difficulty. I actually delayed this write-up a bit because another update was supposed to come out a few weeks ago. Unfortunately, it just got pushed back to this month… so yeah. While I’m sure they intend to do their best to keep their promise, it may be a while before the game ends up in its final state, and as such, I think you can wait on this one. If you’re reading this article after the summer of 2021, you should probably check to see if it’s fully out, as that’s the current estimate for its release date.

Okay, so with that whole thing out of the way, let’s talk about the other simple truth of the game: I had a lot of fun with Wrath. It’s well polished, and very smoothly executed. It’s just fun to run around shotgunning demons and pulping zombies with a stake cannon. I played Wrath because the gameplay was fun. There was no point where I found myself pushing through a boring bit to get back to the story (there really isn’t one right now) or grinding for numbers. Wrath has more or less zero filler.

This doesn’t mean Wrath is perfect by any means. I have some problems, so let’s talk about them.

First of all, while the game is really fun, if you want to actually replay a level, you need to make a brand new save file. There’s no option to just reload a given level, or to skip to a certain point with weapons unlocked. This is annoying. The second part, that wasn’t super frustrating for me mostly because I was playing on the medium difficulty, is the save system. Wrath lets you save by either reaching a checkpoint, or by using an item called a Soul Tether, which you find and pick up as you play through the game. You have a limited number of these, and while this limit caused me zero problems on the medium difficulty, I can see it becoming frustrating super fast on the harder difficulties. Wrath is in some ways a puzzle game of “Connect The Bullets With The Enemies” and it’s entirely possible to get through a section of the game you’ve already solved, only to die over and over again in a specific area. This means you end up replaying the same parts a lot, and if you’re trying to conserve soul tethers, it can take like five minutes to get back to the point you were at previously, just to get another try at something.

These were my two main problems with the game. Wrath is fun, the levels are well made, and outside of a slight overreliance on “You touched a button, now we’re gonna spawn in 10 enemies in your blindspot” the game doesn’t really have any patterns that are frustrating. I honestly expected to be seeing the same levels over and over again, but the actual layout and design is quite varied.

So yeah. Wrath is fun, but currently it’s not finished, and it’s rather short. I have some gripes with the save system, and how you can’t replay levels, but outside of that, I’m excited to see what the full game looks like. If it maintains the level of polish and creativity that I’ve seen so far, it will easily be worth the $20-30 price tag I expect to see on it.