Did you ever look at Chess and think “Wow, I really wish Chess was more complicated, and that you could power up your units?” Well boy do I have the game for you. 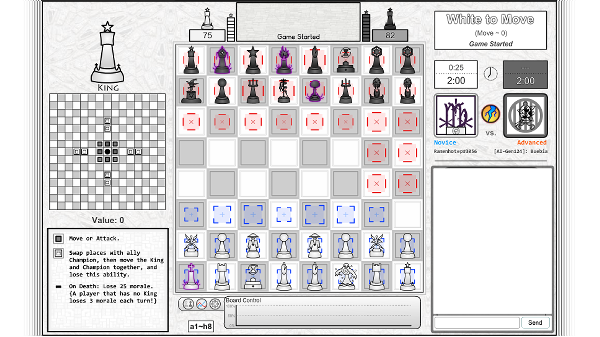 I think Chess Evolved Online (or CEO as I’ll abbreviate it) is neat. If you like Chess, it’s worth checking out. If you don’t like Chess, you can save yourself the time of reading this article by closing your web browser and doing something else. Okay, lede dealt with. Time for a diatribe.

I write this blog about games at least in part because I consider myself pretty good at them, though in retrospect, “Experienced” might be a better word. I play a lot of games. There are many things that I’m not very experienced with, and so I don’t really comment on them, such as international relations, and agricultural policy. I still have opinions on them, but I don’t think they’re valuable to share.

I mention all of this because CEO has reminded me of something I forgot: I really, really suck at Chess. Or at least I really suck at it relative to people who play Chess at any level of actual competition or play.

I bring this up because after playing 12 hours of CEO, I couldn’t tell you if the game is balanced, or fair, or a good Chess equivalent or what. I could probably play 100 more hours, and I still wouldn’t have a good idea.

So instead of talking too much about that aspect of the game, I’m just gonna quickly list a few of the mechanical innovations CEO makes vs an ordinary Chess game, talk about the game’s meta progression structure and my thoughts on that, and then wrap up with a link to the game. I’m not gonna talk about balance or fairness, or whatnot, because I don’t think I’ll get any of it right. I’m also going to assume anyone reading this knows how Chess is played, and if you don’t, allow me to link you to the Wikipedia page on the game.

So, new mechanics. Unlike in Chess, CEO has a different set of win/loss conditions: Morale. Each of your pieces has a value associated with it, which as far as I can tell, generally scales to its power/utility. The queen is worth 21 points, a bishop is worth 12, a rook is worth like 13. You get the idea. When your piece gets taken, you lose that much morale. If your morale hits zero, you lose.

Your king, on the other hand, is special. When your king gets taken, you lose an immediate 25 morale, and then an additional 3 morale per turn. The fairly obvious result of this is that while losing your king will eventually lead to a loss, unlike in standard Chess, it’s not an immediate loss. This has some interesting implications, like being able to trade kings, and also ending up in situations where you have to decide if sacrificing your king might be worth it.

The other special factor controlling the game is “move decay.” After turn 50, each player loses 1 morale at the start of their turn. This effectively puts a cap on how long games can go, and also means that in a game of attrition, whichever player can take a take an early advantage is likely to win. As far as I can tell, there are no draws in CEO.

There’s one last big mechanic in CEO: time. I’m not familiar with professional/semi-pro Chess, but a few quick google searches make it look like the game is limited is to about 90 minutes for your first 40 moves or so.

As you might guess, CEO doesn’t really go in for that. Instead CEO has two formats: CEO Blitz and CEO Standard. Standard gives you 30 seconds a move, after which you have a pool of 4:00 minutes. Blitz gives the same 30 seconds but with a pool of 2:00.

There are a few factors that go into army building. The game has two types of pieces: champions and minions. In general terms, you can only place minions in the front row, and only place champions in the back row. Minions are weaker than champions, and usually (but not always) have a promote ability. This is where another interesting change comes into play: pawns always promote to bishops. This opens up some interesting space for weaker minions with stronger promotions.

Pieces also have a supply cost, and your army has to be under your supply limit. You increase said limit by reaching a higher rank. I don’t love this too much, but I’ll talk about why later.

Everything else about the game feels like a fairly unique attempt to fix some of the problems that Chess has. But how you obtain and upgrade pieces for your army feels fairly standard. Because, of course, pieces can be upgraded.

The game has two currencies, gold and gems. You earn gold by playing games, and you earn more by winning. You get gems by either exchanging gold for gems, completing various objectives, or opening random boxes.

And this is why I say it feels standard: The game loop becomes a pattern of grinding for currency to either buy units straight up at a in-game shop, or buy random booster boxes of units in the hopes of getting something you want. At the same time, you use duplicate units to upgrade your existing units.

And this is where the game started to annoy me. Perhaps it’s because I’m not great at Chess, but all of a sudden the game starting feeling like a mobile game. I was no longer logging on to build unique armies or try interesting strategies. I was logging in to open daily boxes, playing ranked for currency to try to grind more boxes, and just generally playing the game solely to get more units. Instead of trying to build unique armies and innovate, I played the standard Chess army because I was more familiar with it, and I cared more about winning than experimenting.

Now, if I was better at Chess, this might not be true. Perhaps if I was a stronger player, I would find it easier to win, and as such be more interested in some of the other systems that make up the game. As it was, though, I ended up feeling like I wasn’t playing for fun, or to use the game’s unique systems, but to just grind to get more pieces. And this is where I stopped playing.

In summary, CEO’s actual gameplay containes a bunch of massive changes to the core structure of Chess, to try to make it more exciting and interesting, while also speeding up the pace of the game. But the meta-progression structure that exists around the gameplay feels like a standard mobile game, and it feels bad. If you end up matched against AI or players with higher ranking than yourself, in addition to likely being better at the game than you, they also have a larger supply pool to pay for their army. Even if you’re both playing identical armies, if they’ve upgraded their pieces, they have access to options and moves you don’t.

And that doesn’t feel great. And while I suspect that the actual mechanics of things like supply/value on units are probably balanced, it still feels bad to get decimated by someone with a unit you just don’t have.

Ed Note: The poster child for this particular experience is the ninja, a unit that feels like a knight on steroids, with the ability to take pieces in all directions that are adjacent, while also having a unblockable jump.

Chess Evolved Online is free on Steam, with in-app purchases to buy additional rubies, which in turn get spent on buying units/random booster boxes of units. The game makes a bunch of really interesting mechanical changes to the base game of Chess, but it makes them parallel to a meta-progression structure that, for me, made the game feel like a grind. I still think it’s interesting enough that folks should check it out, but I feel like without a strong interest or background in Chess, you might end up having a similar experience to me.