Good polish, neat mechanics, and some flaws that make it quite frustrating at times. 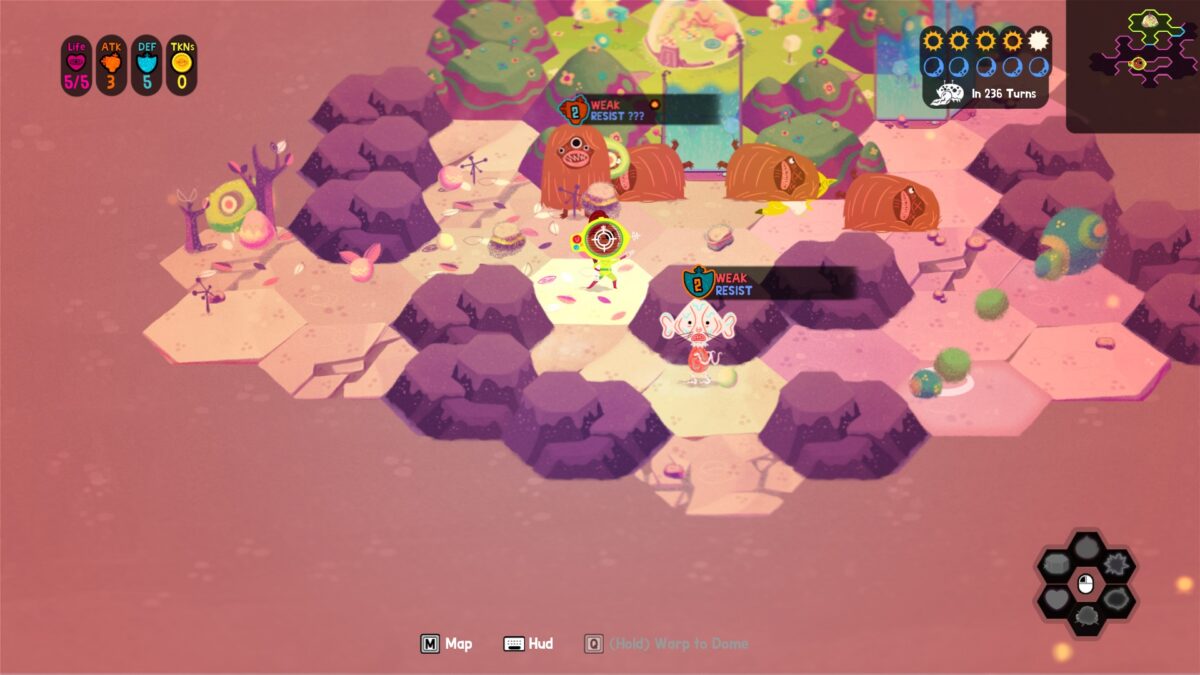 Ed Note: The game looks way better these screenshots might imply. Everything has a very nice vector art feel, a feeling that was absolutely destroyed by my image compression. Whoops.

I think you should play Loot Rascals. Generally, I’d say I like the game.

Has the lede been unburied? Am I now free to waddle forward and backward between comparisons to other games and ramble about dissonance? I am? Fantastic. Let’s roll.

First, a bit of context, and some info on Loot Rascals: it’s another game I grabbed from the itch.io Racial Justice Bundle. It’s a roguelike, but as far as I can tell, without any between run progression systems. A run consists of five or so levels (I’ve only ever gotten up to 3 before, so there might be more), consisting of randomly generated maps on a hex grid. You control a spacelady or spaceman that you choose at the start (same stats, different sprites), to get through these levels by fighting monsters. You have three stats, Attack, Defense, and HP, and monsters have one stat, Attack/HP.

I know what you’re thinking. No, it’s not a typo.

When you and an enemy occupy the same square you fight, with the time of day determining who gets to hit first. There’s a day/night system and manipulating this system and trying to land the first hit is a big part of the game. The math for combat works something like this:

The big takeaway I want you to make is the following: Any attack that hits has a CHANCE to inflict damage, even if the chance is very low. This is going to be important in a bit.

The answer, of course, is cards. Or card blocks. Your inventory looks like this.

Cards in the main section give you stats. Cards in your stockpile on the right do not. There are a few other different types of cards, like the Chronoflange one, that don’t give any stats, but change rules about how the game works, and also elemental cards, that give access to special abilities, like setting things on fire, teleporting, or creating decoys.

So with all of this said, I have two big problems with Loot Rascals, and they have to do with randomness and telegraphing. Lets talk about the randomness first.

A lot of roguelike games use procedurally generated or random-esqe levels in order to increase replayability. Spelunky, Slay the Spire, and Binding of Issac are a few that come to mind. However, none of these are really random. Instead, they tend to follow certain patterns or rules regarding how they function, and those rules can be learned and exploited. Spelunky will always have a dog in the level. Each floor of Binding of Issac will always have a treasure room to find. Each floor of Slay the Spire ends in a boss fight. The levels for Loot Rascals though, appear to be almost entirely random, and occasionally this means you end up in starting locations that are simply bad, forcing you to take early hits and lose health just to access the rest of the map.

In addition, since card drops are almost completely random (certain enemies will always drop certain elemental cards, but I haven’t found anything of the sort for normal stat cards), you can spend a lot of time trying to farm card drops and get nothing, or you can get one or two good drops early, and use them to clean up an entire level. It’s frustrating, because it just ends up feeling like straight luck.

This feeling of randomness is also present in the damage calculation. Because of the way hit chances work, if you end up in a fight, and the enemy gets to attack you, there is ALWAYS a chance that they deal damage. It’s frustrating, because parts of the game can end up feeling very “Push your luck” as opposed to tactical decision making.

The second big gripe I have is with how the actions that enemies will take are telegraphed, and I’ll just be referring to as telegraphing from now on. Every enemy in the game has some form of movement pattern. The Ratmen will run away, Ogre will move every other turn, the half-horse/half-seahorse Horse Bro will flip combat sides… and I can’t think of any more to list, because I haven’t been able to actually figure out how they work. I have no idea how Bola aliens work, just that they go in circles. The game doesn’t give you any information about where Bounty Hunters will aim their next shot, or how a Webbers’ webbing actually works.

The thing is, because of the situations the game puts you into, it often feels like you’re supposed to have this information, and then make the best choice based on the information.

A few other minor quibbles: you can’t save in the middle of game. There are a bunch of disconnected social components that just don’t seem to work. I wish it didn’t feel like there was an optimal build for any given situation. It would also be cool if you had some ability to choose cards for your build.

Outside of all this gameplay stuff, the art is really solid, if a bit cute, and the voice acting was enjoyable enough for me to mostly not skip it. I liked Loot Rascals enough for it to get it’s own whole little writeup, and like I said at the top, I think it’s worth playing. But there were also quite a few mechanics that mostly just frustrated me.

Loot Rascals is $15 on Steam or itch.io.